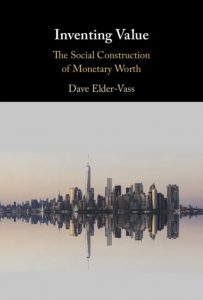 Value is central to the market sectors of the contemporary economy, yet the best-established theories of value fail to expose how it operates and how it is manipulated for profit. This book begins to reconstruct the theory of value. In one sense, it argues, value is a personal assessment of worth, but those assessments draw deeply on normative standards. The book examines those standards and how they are formed, transformed and supported by the construction of new social structures. The empirical evidence comes from contemporary financial examples: the mortgage-backed securities that caused the global crash of 2008, how venture capitalists secure outrageous valuations for so-called unicorn companies, and the rise of Bitcoin. The result is a theory that shows how value is invented by value entrepreneurs in pursuit of their interests and thus provides a new basis for criticising the role of value in the commodity economy and the finance sector.