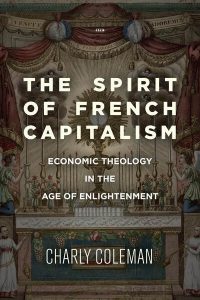 How did the economy become bound up with faith in infinite wealth creation and obsessive consumption? Drawing on the economic writings of eighteenth-century French theologians, historian Charly Coleman uncovers the surprising influence of the Catholic Church on the development of capitalism. Even during the age of reason, a sense of the miraculous did not wither under the cold light of calculation. Scarcity, long regarded as the inescapable fate of a fallen world, gradually gave way to a new belief in heavenly as well as worldly affluence. Animating this spiritual imperative of the French economy was a distinctly Catholic ethic that—in contrast to Weber’s famous “Protestant ethic”—privileged the marvelous over the mundane, consumption over production, and the pleasures of enjoyment over the rigors of delayed gratification. By viewing money, luxury, and debt through the lens of sacramental theory, Coleman demonstrates that the modern economy casts far beyond rational action and disenchanted designs, and in ways that we have yet to apprehend fully.