Environment and Planning A: Economy and Space, vol. 53 no. 3 (2021).
Edited by Lisa Adkins and Martijn Konings. 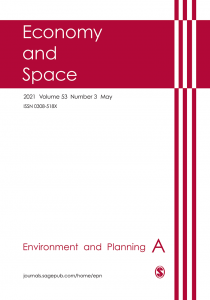 This special issue aims to shed light on the causes and consequences of several decades of property price inflation … The aim is not simply to fill a gap in the literature, but rather to reframe the issue of property inflation, away from the ‘speculative bubble’ framing toward a perspective that is more alert to the social, financial, and urban policies that sustain it and the way these policies both reflect and maintain particular political constituencies and cultural priorities. In other words, this special issue positions property inflation not simply as a result of under-regulation that permits mindless speculation (as left-wing critics tends to argue) nor of overregulation resulting in low supply (as a mainstream economist might argue), but as a result of institutional strategies that have entailed particular kinds of policies and constellations of actors. To achieve the requisite level of institutional contextualization, we have brought together political economists, sociologists, and urban studies scholars along with a diverse suite of case studies spanning housing, finance, and urban development.