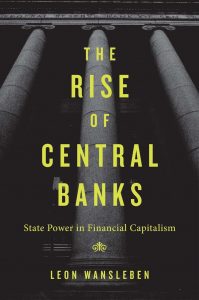 While central banks have gained remarkable influence over the past fifty years, promising more stability, global finance has gone from crisis to crisis. How do we explain this development? Drawing on original sources ignored in previous research, The Rise of Central Banks offers a groundbreaking account of the origins and consequences of central banks’ increasing clout over economic policy. Many commentators argue that ideas drove change, indicating a shift in the 1970s from Keynesianism to monetarism, concerned with controlling inflation. Others point to the stagflation crises, which put capitalists and workers at loggerheads. Capitalists won, the story goes, then pushed deregulation and disinflation by redistributing power from elected governments to markets and central banks. Both approaches are helpful, but they share a weakness. Abstracting from the evolving practices of central banking, they provide inaccurate accounts of recent policy changes and fail to explain how we arrived at the current era of easy money and excessive finance. By comparing developments in the United States, the United Kingdom, Germany, and Switzerland, Leon Wansleben finds that central bankers’ own policy innovations were an important ingredient of change. These innovations allowed central bankers to use privileged relationships with expanding financial markets to govern the economy. But by relying on markets, central banks fostered excessive credit growth and cultivated an unsustainable version of capitalism. Through extensive archival work and numerous interviews, Wansleben sheds new light on the agency of bureaucrats and calls upon society and elected leaders to direct these actors’ efforts to more progressive goals.