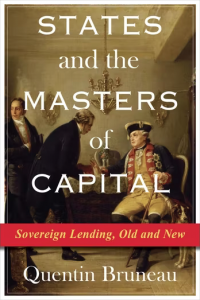 Today, states’ ability to borrow private capital depends on stringent evaluations of their creditworthiness. While many presume that this has long been the case, Quentin Bruneau argues that it is a surprisingly recent phenomenon—the outcome of a pivotal shift in the social composition of financial markets. Investigating the financiers involved in lending capital to sovereigns over the past two centuries, Bruneau identifies profound changes in their identities, goals, and forms of knowledge. He shows how an old world made up of merchant banking families pursuing both profit and status gradually gave way to a new one dominated by large companies, such as joint stock banks and credit rating agencies, exclusively pursuing profit. Lacking the web of personal ties to sovereigns across the world that their established rivals possessed, these financial institutions began relying on a different form of knowledge created to describe and compare states through quantifiable data: statistics. Over the course of this epochal shift, which only came to an end a few decades ago, financial markets thus reconceptualized states. Instead of a set of individuals to be known in person, they became numbers on a page. Raising new questions about the history of sovereign lending, this book illuminates the nature of the relationship between states and financial markets today—and suggests that it may be on the cusp of another major transformation.