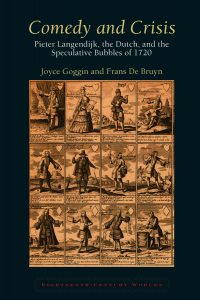 Comedy and Crisis contains the first ever scholarly English translation of Pieter Langendijk’s ‘Quincampoix, or the Wind Traders’ [Quincampoix of de Windhandelaars], and ‘Harlequin Stock-Jobber’ [Arlequin Actionist]. The first play is a full-length satirical comedy, and the second is a short, comic harlequinade; both were written in Dutch in response to the speculative financial crisis or bubble of 1720 and were performed in Amsterdam in the fall of 1720, as the bubble in the Netherlands was bursting. Comedy and Crisis also contains our translation of the extensive apparatus prepared by C.H.P. Meijer (Introduction and notes) for his 1892 edition of these plays. The current editors have updated the footnotes and added six new critical essays by contemporary literary and historical scholars that contextualize the two plays historically and culturally. The book includes an extensive bibliography and index. The materials assembled in Comedy and Crisis are a rich resource for cultural, historical, and literary students of the history of finance and of eighteenth-century studies.