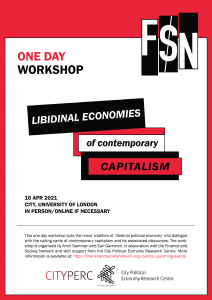 “Every political economy is libidinal.” With this provocation, Jean-François Lyotard expressed the idea that all political economies, in their different historical and theoretical guises, are fleeting efforts to foreclose the libidinal sphere. Various scholars in the humanities and on the fringes of the social sciences have since taken up and fleshed out this idea, imagining the concepts and institutions of modern capitalism as a means of expressing and organising an underlying economy of desire.

Building on these efforts, this workshop puts the minor tradition of ‘libidinal political economy’ into dialogue with the calling cards of contemporary capitalism and its associated discourses, critical or otherwise. Previous research in this vein has focused on neoclassical theory, neoliberal politics, financial crisis, trauma, and waste. The workshop aims to open libidinal economy perspectives out onto a broader set of economic categories and themes, and more specifically those that seem to be emerging as the leitmotifs of twenty-first-century capitalism. Whether we envisage contemporary capitalism as indebted, infected, technologised, or imperilled, whether we think it in terms of assets, data, materials, or energy, ‘the economy’ appears today as above all and more than ever an elaborate, recursive exercise in psychological capture and release.

The workshop is organised in association with the Finance and Society Network (FSN) and with support from the City Political Economy Research Centre (CITYPERC) at City, University of London.

Themes on which submissions are encouraged include (but are not limited to):

In connection with any of the following (or more):

The workshop is planned for 16 April 2021 at City, University of London, although it will be moved online if circumstances require this. Those interested in participating in the workshop and presenting a paper should submit a title and an abstract to Amin Samman (amin.samman.1@city.ac.uk) and Earl Gammon (e.gammon@sussex.ac.uk). The deadline for submissions is 29 January 2021.